The original Speedmaster, first produced in 1957.

Authors note: I have seen more now, than when I first wrote this site, and this page is updated (May 2018). I will reiterate that 2915’s are a minefield of counterfeit parts and put together watches. Be careful, and do due diligence.

Also note my conclusions are largely based on weight of evidence. As I have seen very few, I cannot say for sure what is right and wrong on a 2915 – I have an idea, I have intuitions, but little definitive proof. There are very few people who have handled enough watches to be considered experts. Certainly I am not one of them.

It is possible that every part below on my watches  is questionable – even though some came through knowledgeable sources who assured me of originality. Auction houses simply cannot know.

Please do not take anything on this page as proof of correctness.

2915’s are so rare, that verifying them is something I am unable to do. (I do not know anyone I trust to do so either). So you must use your own judgement and intuition to decide if a watch is worth the price asked, and how much of it is original or at least correct.

Be careful. Comparing bezel styles, for example, with photographs found on the net, is extremely poor research practice. The problem is we simply do not have the provenance to say that any given part was with the watch when new. And if it was, that is one variation of perhaps more than one specification.

One source that cannot be relied upon is contemporary Omega literature, as it has been shown many times that the watches illustrated, (often with drawings not photos) do not depict the watches on sale at the time.

Produced in four executions, over three references, the production dates are very hard to pin down, and the movement numbers and specifications I observe make it hard to be definitive on originality. We can use our heads, and observe the hands and make sure they are not modern, and we can look at the bezel and compare to others, but the problem is what to compare with?

Debates have come and gone regarding serial numbers, and so I  go with my own observations, and rely on statistical weight. So far I feel that numbers ought to be as follows:

I would be very suspicious of watches carrying other serial ranges, because when I see a watch outside these parameters,  there is almost always a question mark over it for some reason – perhaps other non original parts, or dubious history that make me doubt it is an original movement.

The original steel bezels are often missing – Omega offer a service replacement bezel, but it looks quite wrong as it is too wide and the font is different (see below). The cross section is also different.

There are reproductions of various quality, some of which are almost (for me totally) impossible to spot as repro. This is because I have small experience handling enough bezels I know to be genuine. They are so rare, and impossible to truly authenticate. As a result, if the watch carries a bezel that looks right, I accept it. In other words if the bezel is steel, carries the correct profile, is not a cut down modern bezel, and has commensurate wear to the case I will think that it might fit the watch.

What I DO NOT do, is pay $10,000+ for a bezel that someone says is original, nor do I place that value in the watch. I do, it has to be said, allow myself to be swayed if the bezel looks right AND the rest of the watch has no other questionable characteristics. It is my opinion that 2915 bezels might have been engraved by hand originally and so we might expect minor variations. These bezels are very hard to replicate. Many have tried. Those who succeed seem to sell them for about $1000-1500 and as of today I have been unable to find out how they do it – so we could argue they earn their money. Recently, I was told that modern replacement bezels are fetching as much as $4000. I have not seen one offered in public.

We have also to be careful of watches built up using seamaster movements. Its not hard to find a seamaster with a 15m serial. Thankfully they are starting to be appreciated for their own charms, and so are being priced out of the scrappers price range.

There have been two cases on the market recently, at least one of which was an outright fake. The others no doubt will be built up using non original parts. Because so few are seen, it will be very hard for anyone to authenticate.

The 2915-3 comes with Alpha hands (note the length of the hour hand) or broad arrow hands. I tend to think this execution should have the black BASE1000 bezel if fitted with Alpha hands – but just because it makes sense does not mean it was true. These alpha hands are very rare indeed, and differ from the 2998 alphas by having a slightly longer hour hand, you can see it is closer to the end of the dial plot.

Here are some broad arrow hands. On the left are vintage service replacements and on the right original vintage (either original or service). There are other modern ones on the market but they have different shape lume. Over the years many sets seem to have been manufactured, and so even those below on the right may well be old service items. It is a minefield.

Subdial hands are all leaf, and I see them unpainted. Of course over years these get painted.

I have seen a lollipop on a 2915-3, and I am inclined to think this was added after it left the factory – because I have never seen it on another example and I believe lollipops were only fitted to the middle production of the 2998. However it does not put me off, if there is a lollipop on a watch – any watch!

The heart of the value of this watch. Radium lume, it often shows degradation of the type shown in the photos on this page. While there are a few variations of correct 2915 dials, I am not familiar enough to truly be able discern them – and for me it does not really matter as long as they have the short indices on the subdials, and I think it ought to have a flattenened oval on the Omega.

If a watch is missing a dial, or carries an incorrect dial, it is hard to overestimate the reduction in value you must make to the price in the chart. I have seen a 2915 dial sell for over $20,000 and some might say that was cheap. It seems absurd, until you do the calculations.

The first, and most sought after Speedmaster of all. Very hard to find in original condition. The last one that was thought to be original sold in Christies for around $70,000 several years ago. Then in December 2015 Christies sold a 2915-1 with a reworked case sold for $120,000 – but I doubt it was to a knowledgeable Speedmaster collector. Most recently Phillips have sold a 2915-1 for over $400,00

The case back is engraved “Speedmaster” at the edge on the bevel.

Identical to the -1 as far as I can see. Even the serial number ranges are the same, in observed watches.

A further example can be seen here

This came in two versions, one with the same appearance as the previous 2915-2, with a silver bezel and broad arrow hands. The second with alpha hands and a black BASE1000 bezel. The alpha hour hand is slightly longer than the 2998-1 that follows. Also the engraving on the back changed so that the Speedmaster text was closer to the Hippocampus.

Serial Range: All confirmed original watches I have seen have fallen in the 1664xxxx range.

There is no confirmed evidence to suggest a bezel/hand combination follows a pattern. Silver bezels or black bezels can go with either alphas or broad arrow hands. 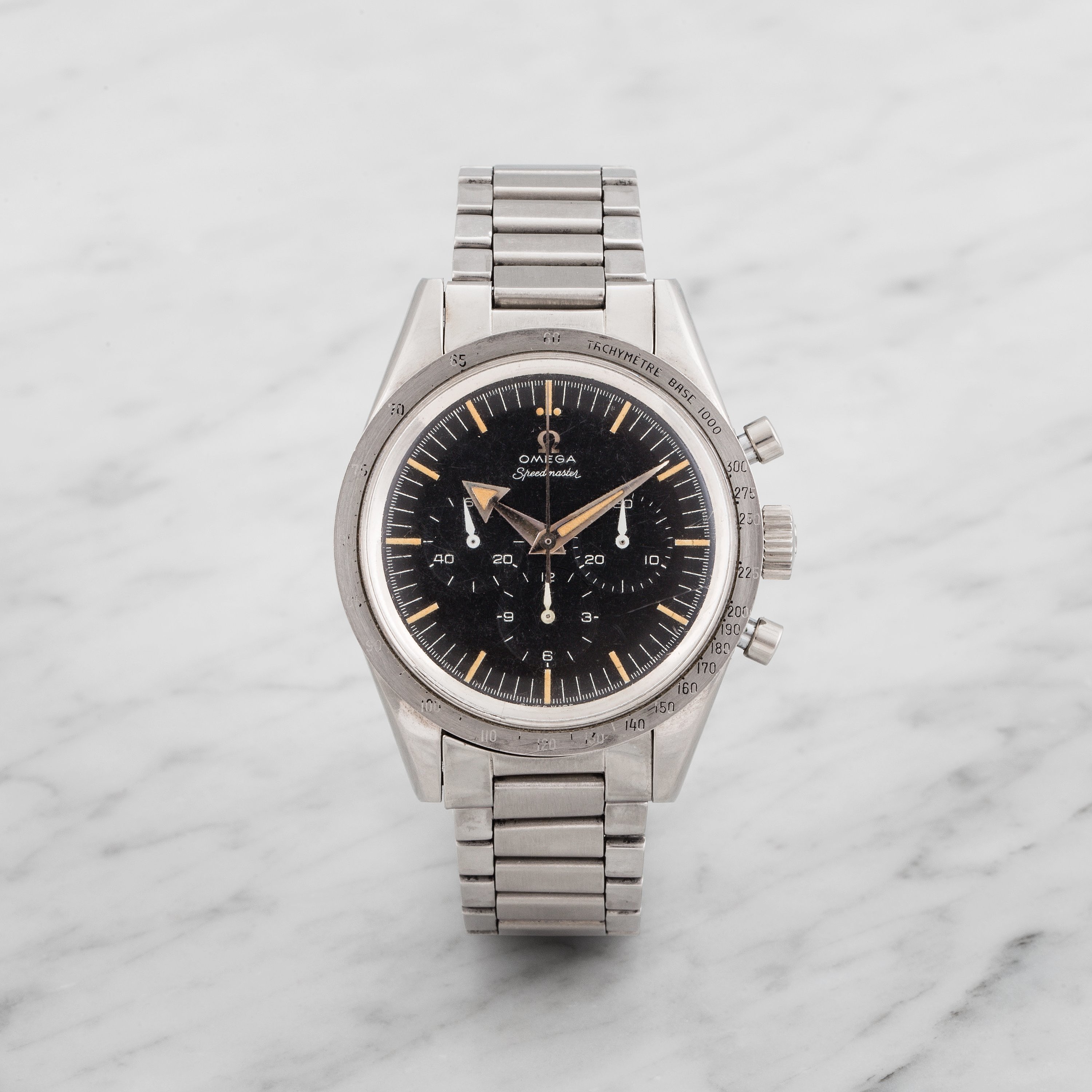