Antiquorum offering seven speedmasters in Geneva, in November 2022. If you click on the banner above, that will take you to the selection of the seven watches.

If you click on photos below, it will take you to the Antiquorum listing.

Three of them are vintage and reviewed here, plus a mention of the Apollo 11 special edition.

I like Antiquorum because they usually have a large number of varied watches. However, in this auction there are fewer than usual. The same goes for the other houses, and i am wondering if this is a reflection that the houses think the Speedmaster market is too thin.

On the other hand, it may be they simply cannot find any nice vintage to sell. Certainly no one I know is selling any nice ones through auction.

This is a tropical 69. The price of these watches is entirely dependent upon the colour, quality and attractiveness of the dial, and this is something extremely difficult to assess over the Internet.

What that means is that a buyer who is trying to assess this watch from afar, is going to be outbid buy a buyer who has held it in his hands who would have the confidence if the colour is special. No one minds overpaying for a special brown dial, whereas gambling a high price, hoping for an attractive brown dial is risky. It might be dry, or crusty, or a disappointing brown in real life.

Apart from the usual checks, I would want to see this dial in daylight, and check the body colour for integrity and attractiveness. Note the tint of the photo above, which has a pinkish cast. This is often when a photographer is using post-production to try to bring out the colour of brown dials.

Final thought is that the price would be OK for a black dial, so I would expect this watch to breach the high estimate if it actually a nice tropical dial.

To be sold without reserve

Signature
Dial, case and movement signed
Provenance
Property of a US collector
It is hard to assess from this photo the desirability of this watch – that said even at the high estimate it has to be worth having, with a confirmed Ed White movement.
I would think this would sell over the high estimate, but if it goes more than $7,000 in this state,  I would be surprised.
It does have original pushers, and the dial would have to be pretty ugly in real life to put people off at this price.
Obviously, I will have a bid on this 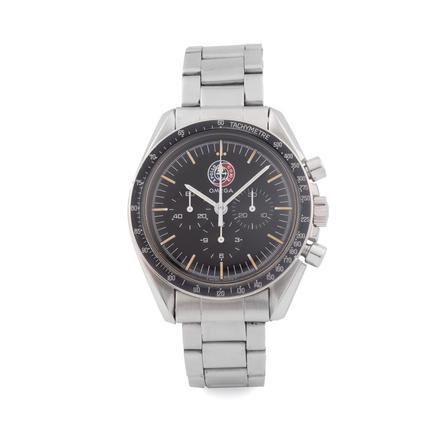 Anyone buying an Apollo Soyuz will already know, or should know, about the doubts and controversies surrounding it. To summarise, there are said to be 500 examples, some assembled at Omega and some assembled at the Italian importer Di Marchi. There is some debate around who made what, where, and to what specification.

An Apollo Soyuz to be valuable to me has to have:

There are several examples with 5mm pushers in modified cases. There are some with standard cases and pushers, otherwise with all the attributes, including an extract.

In this case, we have what looks like a modified case with 5mm pushers, so probably a serviced example where they could not find pushers. I have seen similar sell without apparent hindrance with 5mm pushers, though I would not buy it unless I knew a source for pushers (Can it be that hard?)

The bracelet on this watch looks to be missing the larger links nearest the watch head, as the width is smaller than the end links. When it was sold in 2007 it had what looks like a 1171 fitted.So this bracelet is not original to the watch.

Of concern to me is the 45m serial, which is away from the usual 39m range. An extract will allay this concern. I have heard when Di Marchi himself was assembling them he used later movements, but this doesn’t really fit as its a low series number (095) and we have many close examples with 39m serials. So this is an outlier.

I stress, as long as we can verify this movement / reference combination, it is worth the money.

It is plausible, given the replaced pushers and bracelet, that this watch was an intact original AS, which when serviced had these parts replaced, and possibly the movement too. The solution to this question is easy, a request for an extract will lay these doubts to rest. For me, this doubt must be addressed before paying the estimate. 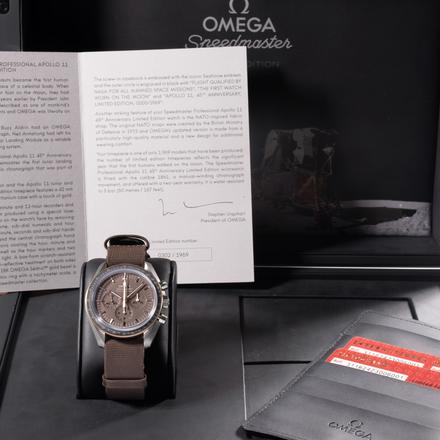 As is known, I am an open minded vintage collector.

The only reason I do not buy modern speedmasters is they do not cause joy to explode in my heart when I hold them. The one exception is this reference, which is the only Modern Omega I walked into an Omega shop and paid full price for, and I have worn it regularly ever since – in fact it is on me as I write.

I find the dial a uniquely beautiful thing combined with the lightness of the titanium and the Sedona gold accents. To be honest, I think it is the most attractive modern speedmaster ever. At the low estimate, it is a no-brainer, and I would still buy it one bid over the high. But that’s me.