The Ultraman is an original watch produced by Omega in very low numbers, (the number bandied about is 50 pieces) and the only confirmed difference is, as stated in the extract, is the fitment of a reddish – orange chronograph hand.

The watch is a 145.012-67 with a long, straight, reddish orange chronograph hand. The length of the hand is unique to this watch, and some black racing executions.

There is also a theory that an original Ultraman was released with a shiny black dial. Not everyone agrees about the dial, but I expect with two identical watches except for the dial, the shiny dial would sell for more.

Although this watch sold at Antiquorum for CHF70,000 with a serial 26540234, with an extract of the archives. There is a rumour the Omega Museum bought it:

MWO also determined the orange chrono hand length is 18.80mm and unique to this execution.

Here is the MWO Ultraman article, in which they determine the orange chrono hand length, serial range and propose a date range of mostly June 1968, with a few later in July and August.

The quick dead reckoning check is to see the extension of the end of the hand, that reaches the outer edge of the minute track.

As of June 2022 I am aware of modern reproductions of the hand that will fool me in a watch.

The museum will issue an extract for an Ultraman, but it does not call it  “ultraman” , it simply notes the watch is a 145.012 with a special orange hand.

According to my conversations with a member of Museum staff, the records show that these watches were fitted with “Special Equipment” but the information in the archive does not specifically say what this equipment actually was.

It is clear to me there is a possible lack of solid information in the archives, and that while the staff are doing the best to interpret the records from an academic viewpoint, the watch owners demanding extracts are motivated by profit – after all if they get that little note on the extract the watch is valued perhaps three times as much as it is without.

So what I think happens is that we apply for an extract with photos, the museum checks the length and colour of the orange hand, and if the archive shows “Special Equipment” then it assumes this special equipment is an orange hand. As far as I know, the other possibilities that special equipment indicates is one of the two black racing dials.

This is disputed by some members of the collecting community who have far closer ties to the museum than I. So perhaps I misunderstood what I was told, and that indeed the records do show an orange hand being fitted.

For me, I will not value a potential Ultraman as such without a museum extract.

Many sources have told me that they expect to see a blacker dial than normal. Sometimes talked of as a silky dial. While I have seen these dials in the Ultraman, it is not on all. I have also seen this dial in non ultramans. I do not know if this is a different dial, or if it has aged to produce this effect. I personally will not be put off a watch if the dial does not display this feature. Other collectors feel differently.

The money these are now worth have prompted some pretty heated debates.

After many threads on various fora, the Davidoff Brothers posted the following on Instagram.

(Copied here from Instagram, let me know if you feel that I should not be doing that – I tried to link it but could not)

The “Ultraman” Checklist
1) 145.012-67
2) 321 caliber between 26,076,xxx-26,079,xxx
(we’ve have seen 2pcs 26,074,xxx)
3) Delivered in June 1968
(For the most part)
4) Jet black dial
(darker and shinier than its predecessor)
5) The long orange chronograph seconds hand is unique in color and length vs any other Omega model
(Hand should go past the Minutes scale)
This model has been discussed in great detail by the watch community, Omega Museum and @watchbooksonly and is really such a rich and interesting model.
6) Lastly, our personal theories: We theorize that the orange hand is a transitional production marker between the diamond bottom & flat bottom chronograph seconds hand. This is not a rule and exceptions have been seen of diamond bottom hands after Ultraman. Overall, it works as a general idea and we think it’s fun to imagine product development team using this orange hand as a marker to signal the hand style change.
7) Theory 2: 1968 marked the announcement of the end of the Caliber 321 (till now ????) and it seems logical that the sales team would then ask for every special configuration possible (hint:Ultraman, 2 types of racing, grey and blue dials) to sell the last remaining stocks. Something we’ve seen brands do time and time again. We think it makes sense.

And the confirmation by Petros of the Museum:

Well done bros @davidoffbrothers ! Finally a sensible concise text. And two utterly sensible theories that I (personally) believe in! I just hope that the oh-so-all-knowing trolls over at “the” forum will eat their hearts out and regain their senses. Cheers ???? bros!

So there you have it, the head of the Museum endorsing the two theories proposed by DB. Note that although they propose five “Conditions” that already the serial range is broken. Further, there are many collectors who will buy an Ultraman without the black dial.

Here is an article by Fratello

Here is an example shown by Analog Shift.

Here the hand appears more reddish and the lume is less coloured than many. Again from Analog Shift is this one on its extract: Here is an example sold by Lauritz. com in 2014: Here again we see the hand is reddish. It is clearly long enough to satisfy the hand length criteria. The full page is here.  This watch does look like a bargain today, even if it turns out not to be an Ultraman. There was no serial listed in the auction so I cannot check. (Notice the chrono creep on the hour sub dial). 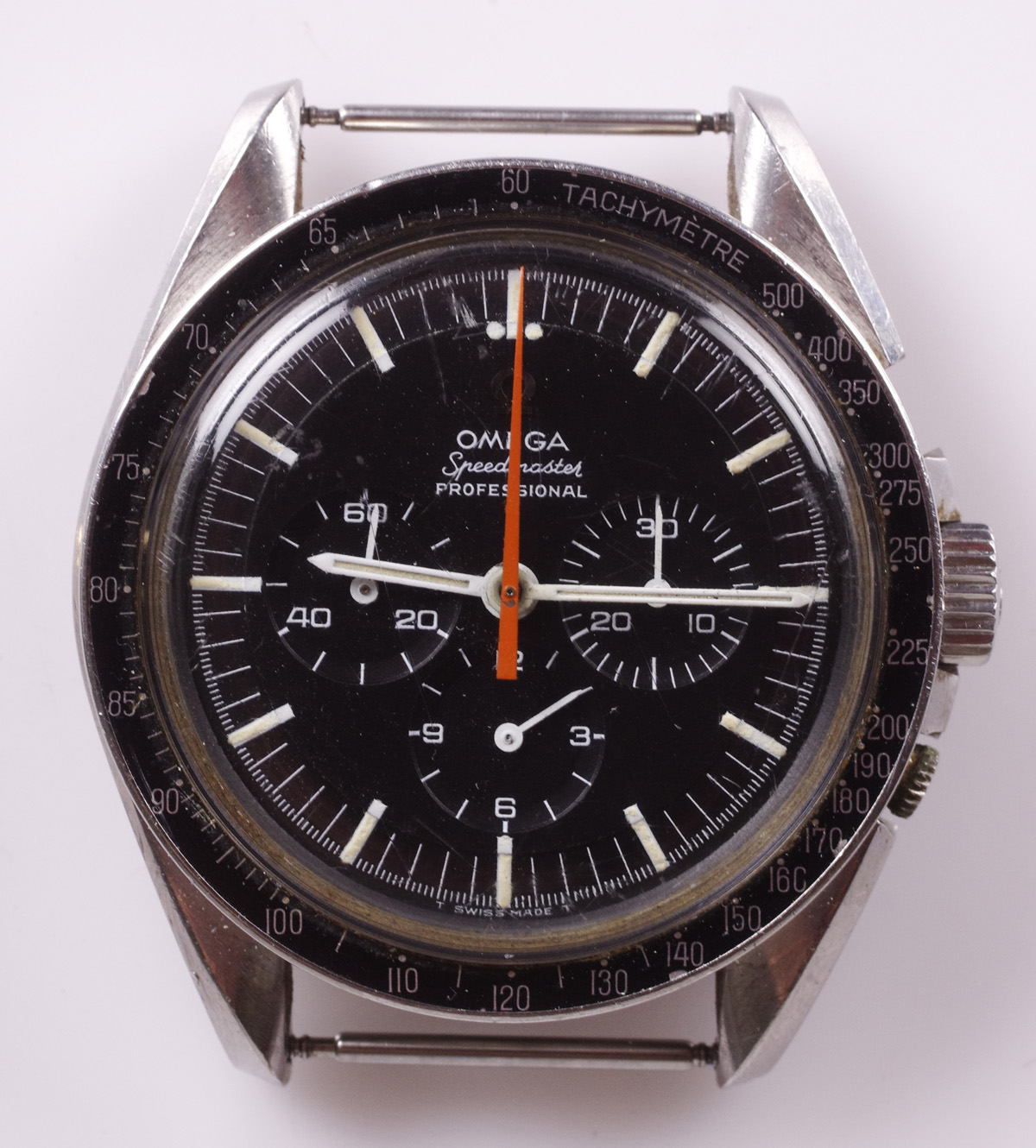 Here is one seen on OmegaForums.net, the page is here

The great thing about this post is the fine photos of the dial, linked here – again a slightly reddish hand. And here the owner has de-cased for a closeup of the dial . The lume is completely gone and we see only the white paint on the dial. 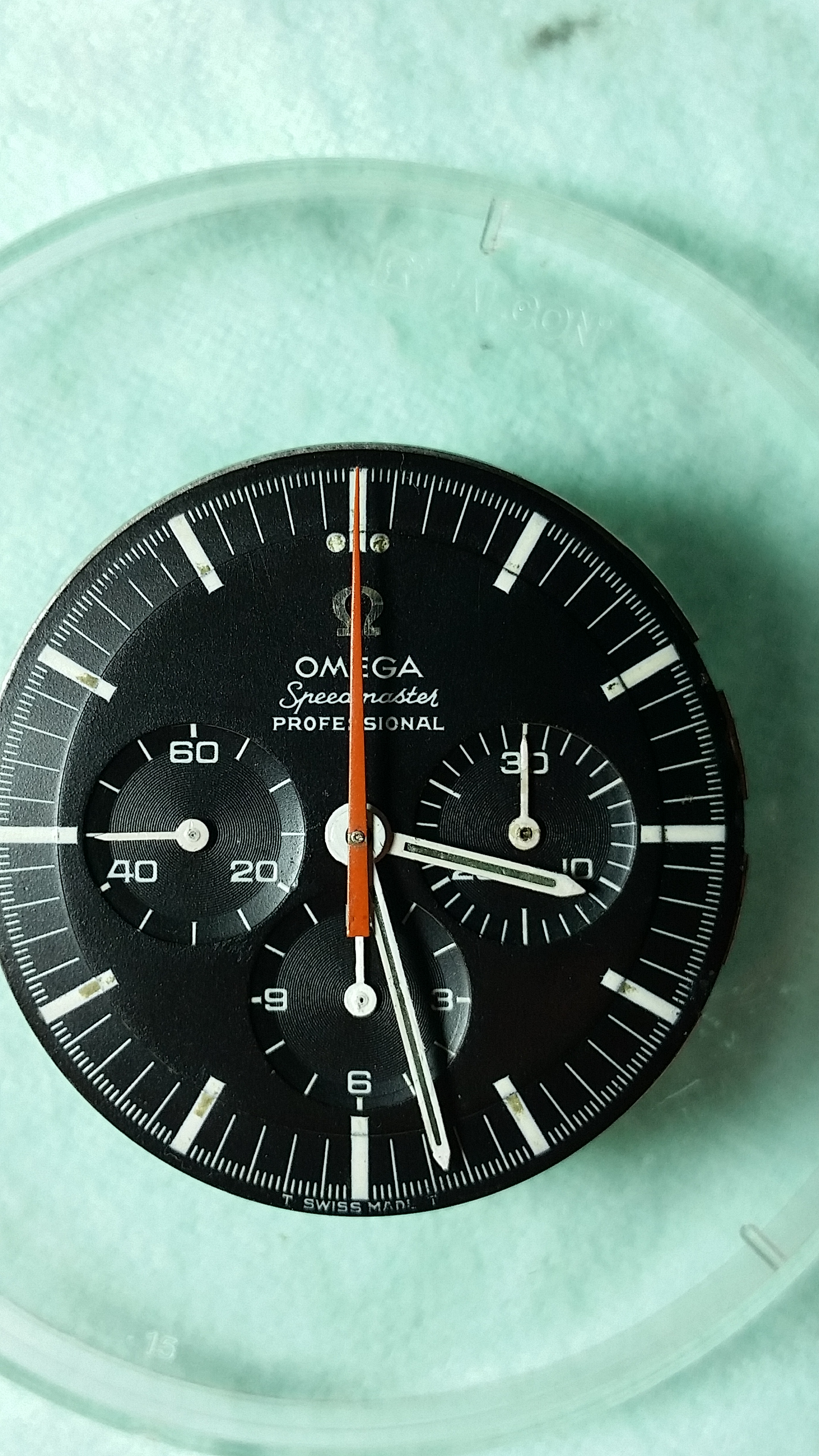 In 2017 Ebay offered this example. Interestingly the extract did not mention the orange hand, but it does appear to be long enough and the serial falls in range. Here we see the close up of the dial and hand. Again the hand strikes me as reddish. It clearly extends to minute track. It was on offer for euros 17,000. Another from Ebay 2018, sold for $35,000. While it did not have an extract, the serial falls into range, and it was also a Meister Dial. You can see the original listing here, and it raises a few questions, but as I said, it sold and I reckon someone with the museum’s number got confirmation of it being Orange Hand if the extract was re issued. Strictly speaking I have to regard this as unconfirmed, but possibly correct. Here is another from Omegaforums, this time in 2015. In the thread it discusses the hand lenth as being too small (i cannot tell) and that it sold for over $8500. As the serial is in range it is possible that it is genuine. In fact there is a serial on the MWO table that is the same as this to the last digit, 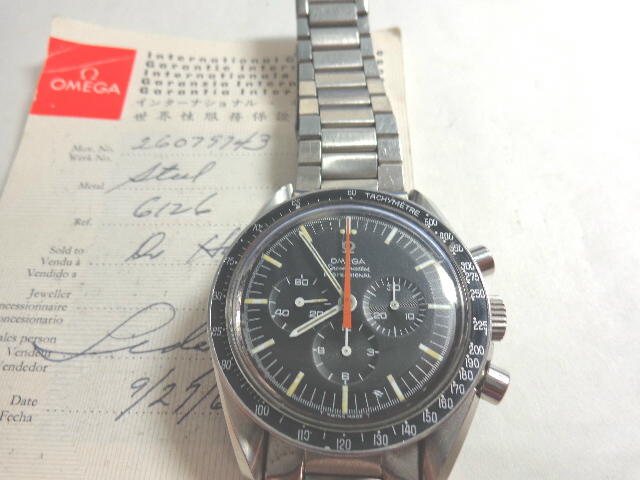 In the same thread is Kringkilly’s watch – interestingly he reports the history as the owner requested the AD to replace the hand on a new speedmaster with an orange one – and it was not known if that was the case or if the watch was delivered as is. Note the reddish hand again. 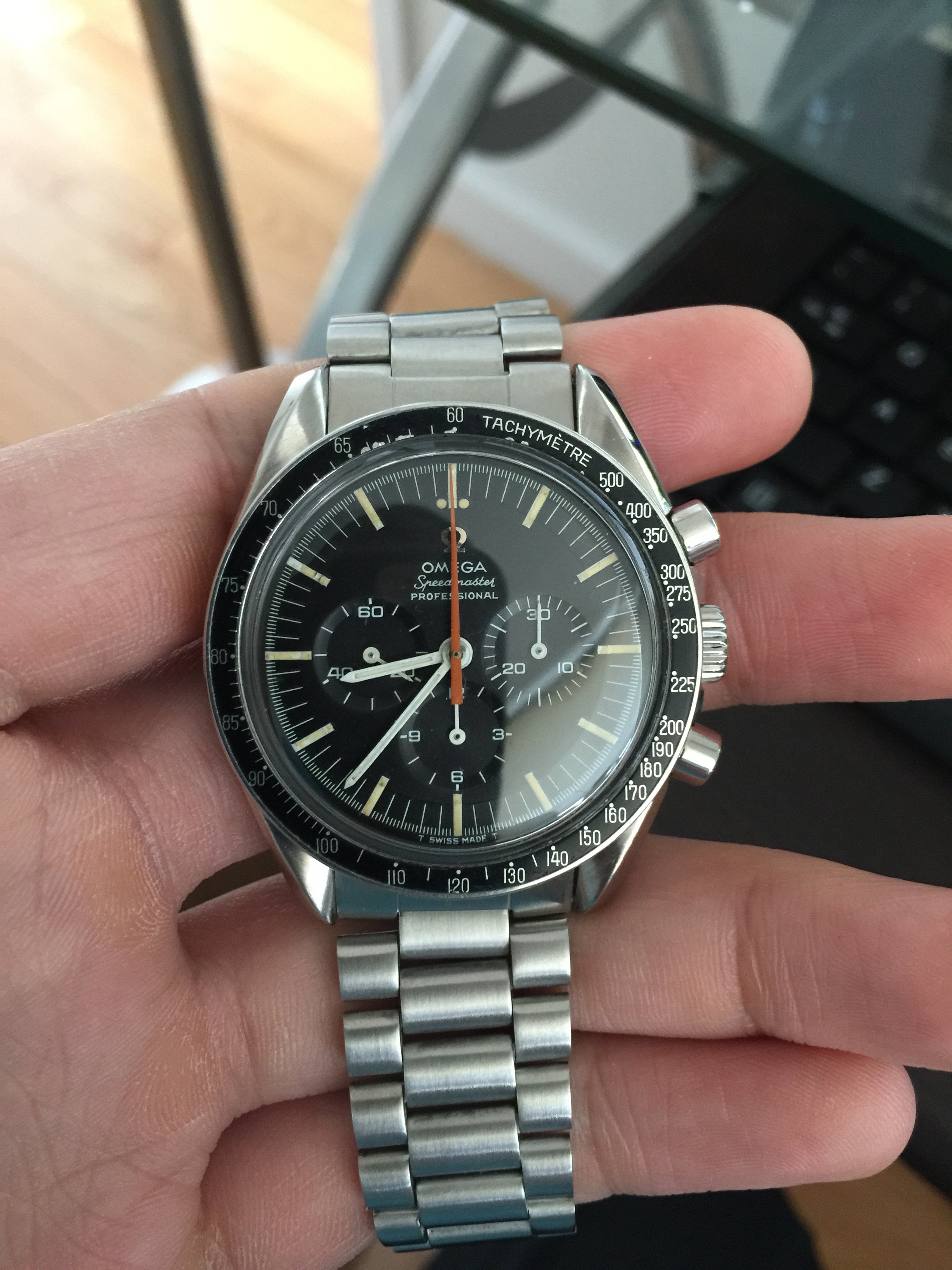 This one, from “one more soul”(?) appears to have a very orange hand, but the right length. I do not know how real this is as the page disappeared Here is one offered by Watches of Knightsbridge in November 2018 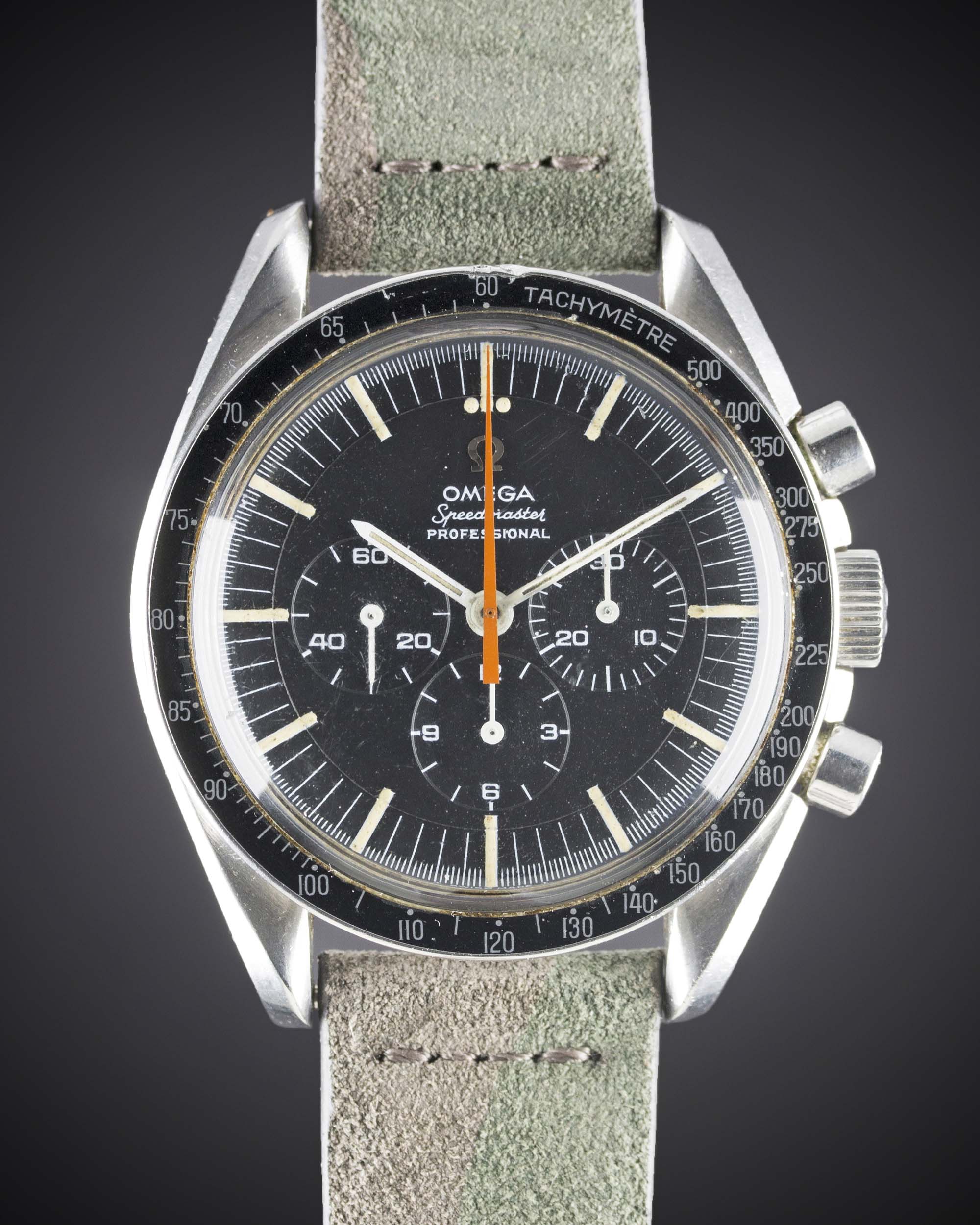 There are those that seek to profit by simply fitting an orange hand and selling it as an Ultraman. This is hard now, as we now know the serial range and the hand length. The latter might be replicable, given the values, but the serial is immutable.

Here is a watch offered on Ebay March 2019. The hand is long enough, but there are those on the OmegaForum who say it is the wrong shape – slightly too fat. But most telling is that the seller, and experienced watch collector/seller, has not got an Extract for it, and has only disclosed the first four serial digits. The general consensus is that this is a carefully worded attempt to fool someone. 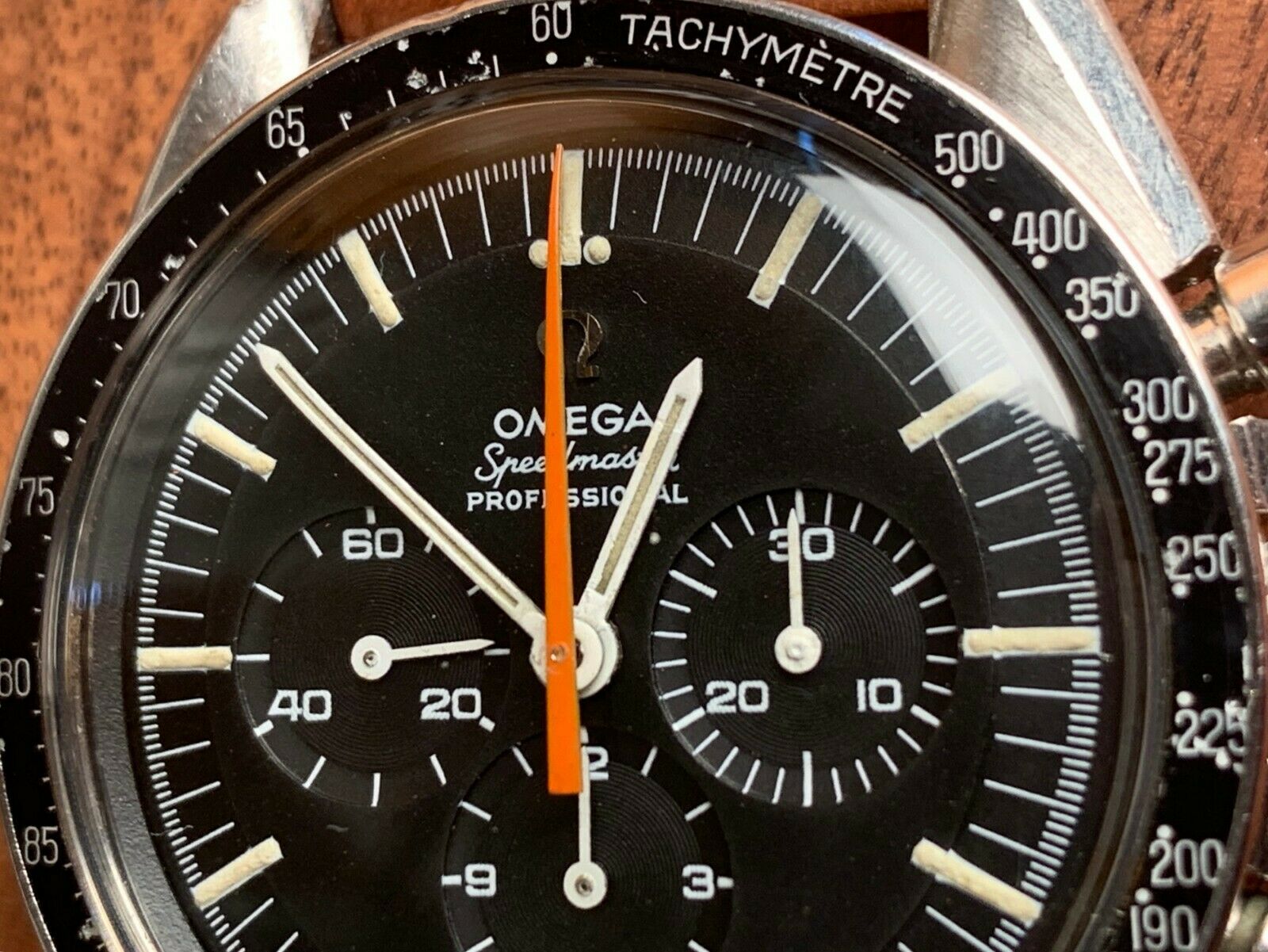 Here is an examples offered by Watch Seller in Australia. Interestingly I believe this might not a genuine Ultraman as the orange hand is short, and the serial is 26m but the third digit does not look like a “0”.